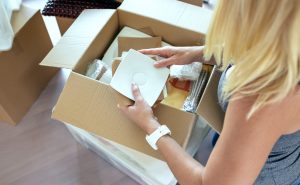 Moving is a big job, and it’s not done until all the boxes, bins, bags, and containers have been emptied of their contents and everything is in its (new!) place. No matter how near or far your move is from your former dwelling place, the same process takes place every time. We’ve got some suggestions to help make your next move as smooth and painless as possible, starting with organizing. Before you can tackle unpacking after a move, you first must pack. We suggest you pack by room, labeling each box with which room it should be deposited in at the new place, and what’s in the box. That way, when your helpers or professional movers unload all those boxes, they know which room each one belongs in, and that will help make the unpacking process smoother. To make sure you’re only taking what you really need and want, read this article on how to declutter for a move. What is the best way to unpack after a move? Here are some ideas:

Before you start unpacking after a move, take an inventory (we hope you made a list!) and make sure that everything arrived safely. If you packed 10 kitchen boxes, you should have 10 to unpack. If you were ultra organized and wrote out a list of the contents of each box (yes, some people are THAT together!) it will be easier to check that everything you packed reached its final destination.

Prioritize according to need.

Everyone has their own ideas about the proper unpacking order, but in reality, it depends on your situation and your family’s needs. Got a toddler? You know you want to set that bed up so that when it’s nap time on move in day, your little one has a familiar place to lay down, even if it’s in a new room. In fact, when unpacking after a move, we recommend you set up the kids’ room(s) first no matter how old they are; children tend to get tired pretty quickly on moving day, whether from helping or the excitement of moving into a new house. Whatever the reason, it’s good for them to have a place to go away from all the activity so they don’t get overtired and stressed out. If you’re unpacking early in the day, you’ve got a little leeway; perhaps you want to unpack a few kitchen essentials and some food to make for your crew first or unpack all those toiletries for the bathroom. However, if it’s later in the day, you’ll no doubt want to set up beds for everyone so that when you’re too tired to unpack one more thing, you have a place to rest.

This is usually one of the first rooms we focus on when unpacking after a move, but it can have its challenges. If they layout is different than what you’re used to, you’ll have to figure out a new way to organize your items efficiently. The best way to unpack after a move is to focus on placing a few essential items where you think they should go and see what works best for a day or two, before you unpack everything that goes in this room. The pots and pans you use every day should be placed in a cabinet beside or near the stove. When unpacking dishes, make sure to place coffee mugs in a cabinet near the coffee pot, and put plates and bowls on lower shelves so that you (and the kids) can reach them more easily. If you’re short on space, use the drawer underneath the stove for things like baking sheets and large cutting boards. Your cleaning supplies can usually be placed under the sink; however, if your cleaning supplies are potentially poisonous to pets or children, the best place for these is either on a tall shelf in a pantry or even in the laundry room instead of below the sink.

This may seem obvious but when you’re unpacking after a move, please remember to put at least one roll of toilet paper and some kind of hand soap in the bathroom as soon as possible! The last thing you want is for someone to get stranded on moving day for lack of TP. While you’re at it, it’s probably a good idea to put bathing supplies in the bathroom, even if you don’t have time to unpack the entire box, so that you can take a shower once all the heavy lifting is done. You can always organize your linen closet once the dust settles if there’s no time on moving day.

As we said above, we think the best way to unpack after a move is to set up the beds in each room first; children can be tasked with deciding how to set up their own room if they’re old enough. It’s a great way to give them a sense of ownership and help them settle in quickly. If your little one can handle it, put the furniture in the room but let him or her decide which toys should go in which bin or on which shelf. You might be surprised at their creativity! Even if they have some ideas you don’t agree with, try and be flexible and let them try it their way for a while. If it’s really not working out after a couple of weeks, you can make suggestions to help them be more comfortable or use their space more efficiently.

When you’re unpacking after a move, decorating may not be something you can get to right away. We recommend you try living in your new space for a few days before hanging things on the walls; you may decide to rearrange the furniture after trying it one way, and if you’ve decorated around it, you might regret hanging a lot of items that don’t work as well when you try a new configuration. After you’re pretty sure you’ve got things where you want them, try adding one or two items at a time until you’re happy with the aesthetic.

Outdoor items, plants, hobby and sports equipment, arts and craft supplies, tools, outdoor furniture, and occasional use items (can you say camping supplies?) can wait to be unpacked once you have time. The best way to unpack after a move is to have a designated spot for these items such as a back deck, garage, or storage shed, but they don’t need to be in perfect order on day one.

We hope these tips on unpacking after a move have been helpful to you. At Golden North Van Lines, we help families make the move to and from the Frontier State of Alaska. If a move up north is in your future, we would be happy to help. We are an Alaskan relocation service with offices in Anchorage and Fairbanks, and decades of experience successfully moving households and businesses. We’re here to take the worry out of the moving process so you can focus on the adventure of moving to Alaska! Call us toll free at 1-800-478-4685 or get a free quote today!