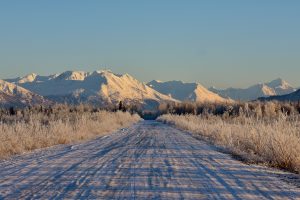 Lack of Roads in Alaska

Due to the varying extreme weather conditions in Alaska, the roadways tend to freeze and thaw, causing a certain amount of damage to the asphalt and leading to frequent road repair work during the summer months. Alaska has only 12 numbered highways, and half of the public roads in Alaska are unpaved. The state capital of Juneau can only be reached by air or water, having no outside road access. Bordered by two oceans and three seas, with 3,000 rivers and approximately 3 million lakes, boats and sea planes abound and represent a popular means of transportation in Alaska, as only 20 percent of Alaska is accessible by roads. When you do travel on a road or highway in Alaska, expect to see an abundance of wildlife, as the state is home to more animals than people. In addition to hosting 98% of America’s bear population, the state is also home to several hundred different species of birds, and known for its population of caribou, deer, elk, moose, and whales.

Alaska is the largest state in the union, being more than twice the size of Texas. In the past, sleds pulled by dog teams were the main source of transportation and supply delivery in many parts of the state. In today’s Alaska, ferries, barges, planes and trains deliver supplies to various parts of the state, although dog sled teams are still utilized for recreation and sport. Much of Alaska remains a pristine wilderness untouched by signs of modern civilization, but although the state may have a distinct lack of roads when compared to the lower 48 states, Alaska does have five nationally designated Scenic Byways, three of which depart from Anchorage, the state’s largest city.

Commuting in Alaska is not like commuting in most other places in the U.S., where a trip to the office might be taken via plane, boat, or ferry unless you live and work in a major city like Anchorage or Fairbanks, where most workers take their private vehicle to work or carpool with coworkers. While it is true that living in Alaska can present some unique challenges when it comes to the use of roadways, the beauty of the natural wilderness is second to none.

If you are moving to Alaska and need an experienced, qualified mover, you can trust Golden North Van Lines. We have the expertise that makes us the best choice for your relocation to Alaska. We offer a cost effective moving option that gives you peace of mind, will help you save time, stay organized, avoid injury, and arrive at your destination ready to begin your Alaskan adventure.

With offices in both Anchorage and Fairbanks and decades of experience successfully moving households and businesses to and from Alaska, Golden North Van Lines is the Alaska moving company you can trust. If you’re moving to Alaska, contact us today for a free quote and let us help you prepare for a successful move. When you put your trust in Golden North Van Lines, you can rest assured that we’ll treat your household goods as if they were our very own and help make moving to Alaska smooth by eliminating all the worry and taking the trouble out of your move.