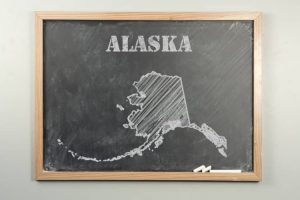 Mention Alaska, and the images that jump to most people’s minds is that of glaciers, mountain tops, and endless snow. But Alaska also hangs its fame on its gargantuan size. With 663,267 square miles within its borders (Texas is the second biggest state at a mere 268,581), Alaska could gobble up 19 other states and have room left over.

Land and Water Everywhere, But Not So Many People

The lure of the nation’s biggest state comes not simply from the size of Alaska or even its beauty, however. Many visitors make their way to the frosty land to capture some of “the Last Frontier” essence. The remoteness that attracts so many means that it has the lowest population density of the 50 states, with 1.1 people per square mile. In comparison, 1,200 inhabit New Jersey per square mile, while the District of Columbia’s population density is 10,589 PPSM.

Some parts of Alaska must be reached by ferries because water plays such a central role in Alaskan life. Alaska’s 6,640 miles of dazzling coastline comprises 50 percent of all coastlines in the United States.

The Distinct Regions of Alaska Offer Something for Everyone

The land of the midnight sun boasts six distinctive regions:

Southeast Alaska is comprised of several large islands, thousands of small islands, and a thin strip of land connecting it to Canada. This region enjoys a temperate climate: in the winter, low temperatures hover around 10 degrees, and summer highs range in the 60s and 70s.

South-Central Alaska provides a home to up to 94 percent of Alaskans, with Anchorage, Alaska’s largest city, anchoring the region. Many cruise ships begin and end their journeys here. Because a 450-mile mountain range protects the region from Arctic blasts, farmers here enjoy lush farmland. Oil and gas exploration has a large presence in the region.

The Interior stretches from the Canadian Border to the Bering Strait. The Yukon River winds through the region, with native villages throughout. Fairbanks calls this region home, as do a significant number of military bases and personnel.

The Arctic of Alaska has the most extreme temperatures. Covered with ice seven to eight months of the year, the sun never rises above the horizon for two months during the winter. Its contrast arrives in summer when the sun doesn’t set for two months.

Western Alaska makes up the remote area between the interior and the Bering Sea. Only about 3,600 people inhabit this region, with Nome centered as its largest city. Commercial fishing drives the economic force in Western Alaska.

Southwest Alaska has much of its population concentrated in the Kodiak Island Borough. Twenty-seven percent of residents here identify as Native. This region has no land connection, making boat or air travel necessary.

Alaska has something to offer almost everyone — from those who long to appreciate the beauty of nature to survivalists or mountain climbers. Getting there poses its own challenges, and if a move to Alaska is calling your name, you’ll need some professional help.

Not just any moving company can tackle an Alaskan move. Whether you’re moving for a residential or commercial change of address, you need professional movers who specialize in relocating people to the Last Frontier.

Perhaps Alaska’s greatest draw lies in its fullness of possibility. Whether you choose a temperate climate or the most extreme and remote region it has to offer, Alaska will not disappoint.